Authenticate your certificate and documents or simply draw attention with this mark of your school name written in ancient Chinese seal characters. Same type of script used to make official seals for Chinese and Japanese emperors.

Add a touch of professional authenticity to your certificates, awards, documents, cards, and books.

We will customize this Tenkoku style stamp with the translation of your name and title (title optional) in ancient Chinese seal characters (also known as Tensho in Japan and Hanja in Korea.)

This high quality, self-inking stamp is completely self-contained in an impact-resistant, durable case which assures a long, trouble-free operating life. This stamp is guaranteed to make thousands of clear impressions before the first inkpad ever needs replacing.

Sensei Jason Adams, Adams’ Self-Defense Academy, Great Falls, MT: “Excellent. I ordered a Martial Arts stamp, so my certificates, letters, and overall appearance of documents would be better looking. Good Characters, however, made them look far more than that, and I have only had positive comments about the stamp. The excellent craftsmanship and detail that Good Characters has put into their products has benefited me and my school. Thanks and I will definitely be ordering more or let others know to order from Good Characters.”

Other companies offer carved stone chops. To help you make informed purchase decisions, we provide the following comparison between these products and our self-inking stamps.

Custom crafted by Good Characters in California; order now and we will deliver it within 7 to 14 days.

Nine-Character Stamp™ only at Good Characters: Nine is a mystical number in China. It symbolizes eternity. It’s said that a dragon has nine sons. There are nine types of dragons. The Forbidden City, the imperial palace of the Ming and Qing dynasties in Beijing, is said to have 9,999 rooms (although the actual number depends on how one defines a room). Thus, a nine-character stamp is one of our most popular. No matter how long or short your name is, our Chinese naming experts can create a nine-character representation of your name (and title, if you wish) and rank and style for your master signature seal. Some masters prefer a six- or four-character stamp. There are two ways to lay out a six-character stamp. Our experts will choose the best design according to your individual name. Characters are typically arranged vertically from top to bottom, from right to left, in accordance with ancient tradition. In this example, John is represented by the two right-most characters, Johnson by the two characters in the middle, and Shihan by the two characters on the left. In English, the title is placed before the name; in Chinese, Japanese, and Korean, the title is placed after the name. 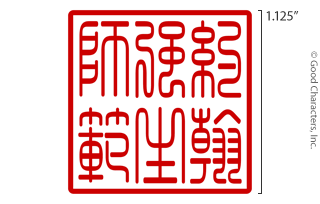 Sometimes the four-character design makes a great impression with high visual impact, especially when the name is short or has very few syllables. Again, our experts will design a stamp that’s most appropriate for your unique name. The twelve-character design is also popular among instructors who have a lot of information to include in a stamp. 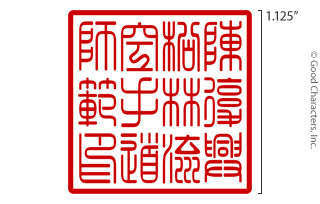 You may mention your favorite layout or design on the order form and we will custom design it for you. If you want to go to the max, you can have a 16- or even 25-character stamp. We don’t charge by the number of characters, so you can include as much info as you desire. However, a word of caution: An all-you-can-eat offer doesn’t mean the more the better. If you are wondering how much to include in your stamp, feel free to add that comment on the order form in the “special instructions” box and we will evaluate your request and design the best stamp for you.